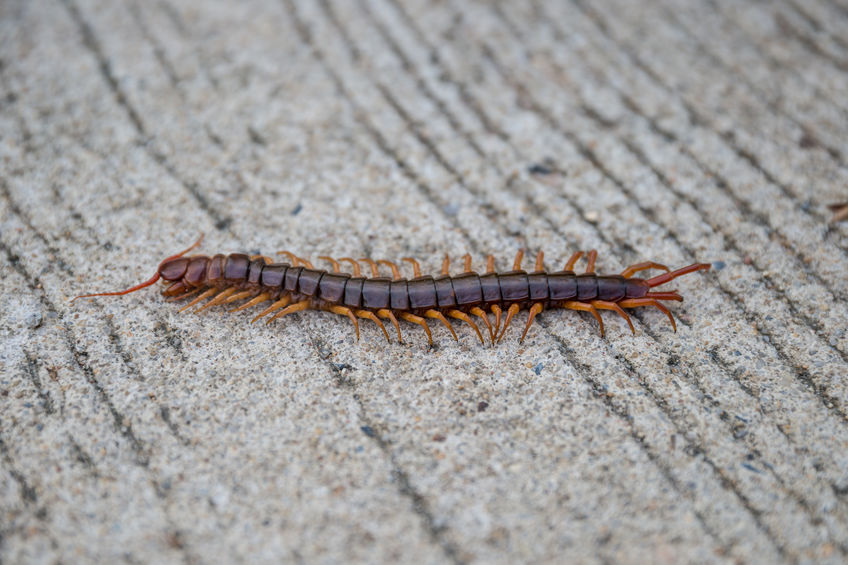 When it comes to the relative body sizes of North America’s native centipede species, the desert centipede ranks third behind the 8 to 10 inch giant desert centipede (S. heroes), and the 12 inch Amazonian giant yellow-leg centipede (S. gigantea). Luckily, the latter species cannot be found farther north of Mexico, and while the former is prevalent in the Sonoran Desert, the species is not established in San Diego.

With the exception of their varying sizes, these freakishly large centipede species are similar in appearance and they all belong to the genus Scolopendra. The desert centipede is the only Scolopendra species that is known to inhabit San Diego where they are frequently encountered on residential landscapes, and sometimes, within homes. While the common house Centipede (Scutigera coleoptrata) is the only species of its kind that regularly invades homes, hazardous indoor encounters with alarmingly large and venomous Scolopendra centipedes have been known to occur.

In addition to being the largest centipedes in North America, Scolopendra species also inflict exceedingly painful bites that deliver toxic venom into the human bloodstream. The desert centipede inflicts bites that have resulted in medically serious envenomations, and a variety of other documented medical maladies including necrotic bite wounds, secondary infections, and severe allergic reactions including potentially fatal anaphylactic episodes. In the US, five human fatalities resulting from Scolopendra centipede bites were reported between 1991 and 2001, and an additional two were reported between 1997 and 2007.

Giant desert centipedes dwell in moist soil, and they are commonly found beneath backyard objects like bundles of plant debris, stones, landscape ornaments, potted plants, patios, and mulch. Numerous San Diego homeowners have reported finding giant desert centipedes in their kitchen, bathroom, cellar, basement, laundry room, and other moist indoor locations. While Scolopendra centipedes have been known to bite humans within homes, such incidents are very rare, and most centipede envenomations in San Diego occur in residential lawns where yardworkers, landscapers, and gardeners are the most common victims.

Have you ever encountered a centipede longer than a few inches on your property?

The Dangers Of Drywood And Subterranean Termite Infestations

Easy Pest Control: Tips and Tricks to Keep Pests Away

Facts To Know About Termites