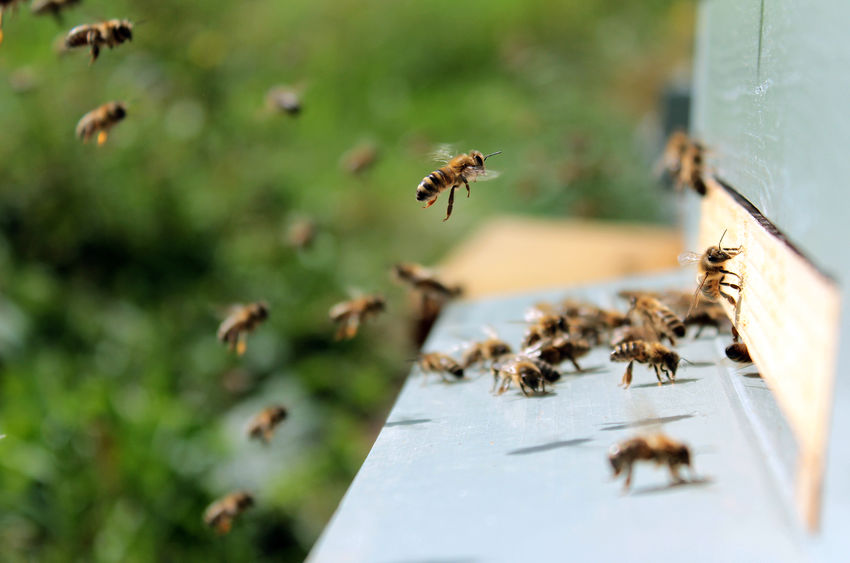 Every four years, Americans go to the polls and vote for a president. It’s a process that’s been around for more than two hundred years. Honeybees have been “voting” for 20-50 million years! Why and how do they do it?

Each spring, beehives can get so crowded that the colony decides it’s time to establish a new home. In honeybees, a vote happens about when to move a hive from one area to another, very much like a democracy. Collective decisions are the “checks and balances” on non-human leadership.

The queen bee takes flight with about half the hive’s workforce and settles on a staging spot, perhaps a tree branch. From this vantage point, several hundred worker bee scouts search for an appropriate new abode. When a scout finds one, it returns to the group and performs a “waggle dance.” The more a bee shakes its stuff, the more promising it thinks the site it explored is, based on factors such as its size, humidity and the density of surrounding flowers. If the bee’s dance is vigorous enough, other scouts will locate and assess the location – similar, perhaps, to a presidential primary when candidates try to capture voters’ attention with alluring displays. So, it can be said that bees dance themselves into a consensus!

Given the striking way that the dances on a swarm come to represent one site and then the swarm moves to this site, researchers were tempted to conclude that a swarm’s decision-making process is essentially one of consensus building. By this hypothesis, a scout bee “votes” in favor of a site by dancing for it; somehow the scouts act and interact so that gradually their votes come into agreement in favor of a superior site; and somehow the voting pattern of the scouts is steadily monitored so that they know when they’ve reached an agreement and can start acting on their decision. Exactly how scout bees sense a quorum remains an enigma. They may use visual, olfactory or even tactile information to assess the number of fellow scouts at a site, but this remains a subject for future study.

By eavesdropping on the decision-making of swarms through observation of the dances of their scout bees, researchers have shown clearly that a swarm chooses one nest site from an array of five or more alternatives. The next question that naturally arises is whether a swarm chooses the best site, and if so, how?

When the choice is between sites of equal quality but unequal distances, the swarm should choose the site closest to where they are because of the shorter travel time (unless there are other reasons why a more distant site should be preferred). However, when a better quality site is present, this site should be selected regardless of its distance (presumably up to a certain maximum distance). Which site is chosen depends on the way in which scouts search their environment; that is, the probability that a site at a particular distance is discovered. Ideally, the scouts should search such that nearby sites are given preference, without losing the option to choose a site farther away if this site is of better quality.

Evolution has honed the decision-making methods of honeybees over millions of years, and researchers have considered similarities between the ways that bee swarms and primate brains process information. They conclude that what works well for bees can also work well for people: any decision-making group should consist of individuals with shared interests and mutual respect, a leader’s influence should be minimized, debate should be relied upon, diverse solutions should be sought, and the majority should be counted on for a dependable resolution.

If bee “house hunters” have settled on your yard, vote for safe and effective removal from a licensed pest control specialist.