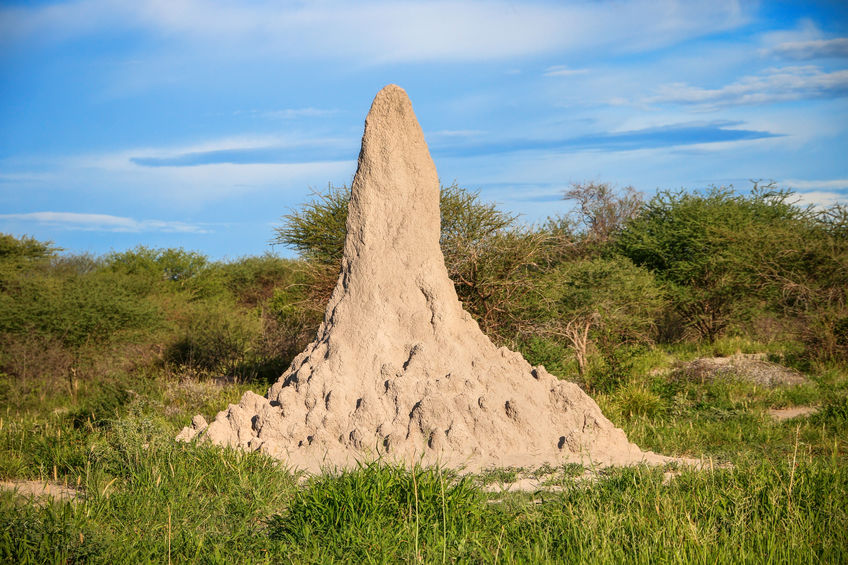 Known as rice or white ants, the rysmiere are not even closely related to ants. They are termites, which makes them a much closer relative to the cockroach rather than the ant. These termites are found in the southern part of Africa, and they build above-ground mounds, consuming more bark and grass than all the giraffes, kudus, gazelles and zebras combined.

You should be familiar with these termite mounds, they are very common in the southern African savannah, and you often see them in pictures of the continent. What makes them truly impressive is that a colony will go through around a quarter of a ton of soil each year, transporting it through their tunnels and filling it with nutrients. In fact, it is due to this activity that you will find lush grasslands areas in the otherwise arid savannas.

The mounds were thought to have “air-conditioning” systems built-in. By creating this giant mound outside of the nest, the termites supposedly created a way to circulate air and eliminate excess heat and moisture. This would theoretically leave the nest cool and dry in the scorching savannah – an AC system if you will.

However, researchers came to a different conclusion upon further examination using the “pulse-chase” experiment method, where puffs of propane gas are injected into various locations within the nest and followed around to see where they went and how they exited. This experimentation revealed that the nests are not air-conditioned, and that rather the purpose of the mound is to capture wind and mix it with the stagnant air inside the nest. If you think about the oxygen demand of an underground colony with millions of termites, you start to see the brilliance of harnessing the wind in order to gain access to fresh air.

But while settling one question, many others spring up. How do termites know, as a collective, the right architecture and structure for this mound? How do they build the mount? What adaptive advantages does this collective ability gain them? This collective intelligence can be seen if you drill a hole in the mound. Soon, a few termites will show up to plug the hole, and shortly after that you will have a small swarm frantically rebuilding their mound. The interesting thing is that the distance from the nest to the edge of the mound is quite considerable.

Some researchers attribute this ability to a collective, swarm intelligence that is even capable of falling into “mental illness” or disarray. What is certain is that individual termites are not mindless automata or tiny robots. They each have their own personalities and traits, believe it or not, and they live their lives in a microcosm parallel to our own. This implies that understanding how termites manage to build and live in such complex structures may be a more complicated issue than previously thought. Sure, they respond to various stimuli, from pheromones to changes in temperature and light, but to what degree does “agency” come into play in the life of the average termite is still up for debate.